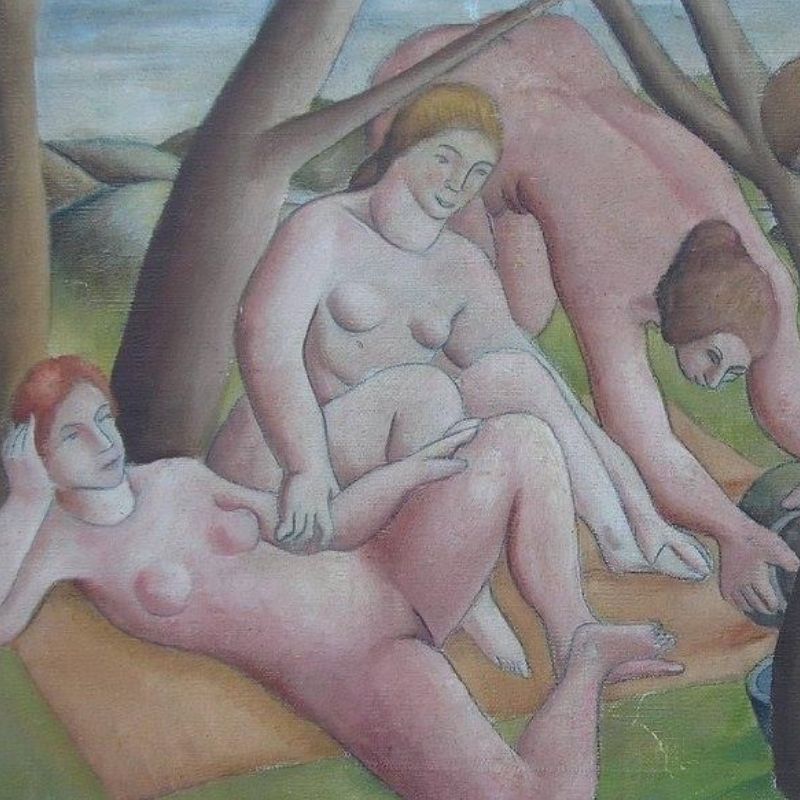 “A Timeless Spring,” an exhibit exploring the artwork of Mrs. Carl Cherry and Reuben Kadish, closed September 4th. The exhibit can be seen online through October 31, 2021.

In the years around World War II, modernist art produced in the United States was varied in style and subject matter.  Artwork from this era was produced by an increasingly diverse group of artists working in a range of media, as revealed by the works in the current exhibition. The muscular surrealism and abstract expressionism of Reuben Kadish meets the churning forms of an early WWII-era Carmel art by Mrs. Carl Cherry (Jeanne D’Orge). Focusing on the period of 1935 to 1980, the exhibit is not a unified conjuring of American modernism, but rather a cross-section of many-sided–even incompatible–art forms, media and themes.

Reuben Kadish–painter, muralist, printmaker and sculptor–was born in Chicago in 1913. At fourteen he began studying with Lorser Feitelson. Politically outspoken, Kadish caught the attention of Jackson Pollock and they became friends. Kadish taught at the Pacific Institute of Music & Fine Art and assisted muralist Siqueiros in Mexico and in southern California. During the 1930s, he was in San Francisco and head of the mural division for the Federal Art Project. During WWII Kadish was an art correspondent for Life magazine. After the war, he purchased a dairy farm in New Jersey and withdrew from the art world until the late 1950s. Mr. Kadish then took up sculpture and taught at the Cooper Union in NYC. Kadish died in NYC on Sept. 20, 1992.

Born in 1887 in England, Jeanne D’Orge spent her childhood in Edinburgh, London, and Paris. Her book of verse, Voice in the Circle, published in 1955, focuses on her childhood in Europe. After moving to New York in 1906, D’Orge became associated with “The Others,” a group of iconoclastic poets that included Marianne Moore, William Carlos Williams, and Wallace Stevens. Her poetry was included in the anthology The Others and The Poetry Journal. In 1923 Scribner’s Magazine published her award-winning “Lobos” poems.