The Carl Cherry Center was founded by Jeanne D’Orge, neé Lena Yates, a published poet and playwright, who emigrated to the United States from England in 1906.

D’Orge and her first husband, Alfred Burton, a Dean at Massachusetts Institute of Technology, had left the East coast for Carmel at the urging of the artist Marsden Hartley. After living in Carmel for a number of years, D’Orge moved to the Augusta Robertson cottage, now the home of the Carl Cherry Center for the Arts, with her second husband, the inventor Carl Cherry.

In the early years of D’Orge and Cherry’s marriage, the couple sustained themselves on work, canned tuna, and coffee. D’Orge, at the suggestion of her husband, began to paint while Cherry preoccupied himself with his inventions, one of which was the Cherry Blind Rivet. Cherry’s invention revolutionized the aircraft and shipbuilding industries, and was in great demand during World War II. While income from the Cherry Blind Rivet provided the couple with enough money to live lavishly, it changed their lifestyle little. They bought more books and more records, and began to think of establishing a foundation to support experimental arts and sciences.

After moving to New York in 1906, d’Orge became associated with “The Others,” a group of iconoclastic poets that included Marianne Moore, William Carlos Williams, and Wallace Stevens. Her poetry, some of which was published before she was 20, was included in the anthology The Others and The Poetry Journal. In 1923 Scribner’s Magazine published her award-winning “Lobos” poems.

d’Orge died on May 1,1964, at the age of 87. Although her painting was recognized in her lifetime for its forcefulness and spirit with exhibits at the Santa Barbara Museum of Art, the Park Avenue Galley in New York City, and the De Young Museum in San Francisco, D’Orge insisted that her paintings never be sold, saying only, “I’m just a paintbrush for God.” 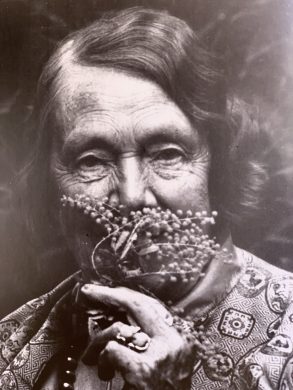