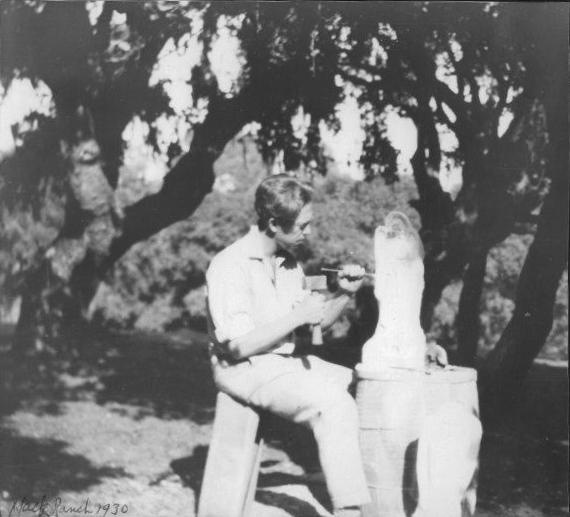 When the Works Progress Administration commissioned murals for the interior of San Francisco’s iconic Coit Tower in 1933, it was suggested that “some of our best painters” be commissioned for the project on Telegraph Hill. Two of those artists– Maxine Albro and Parker Hall–were married in 1938 and moved to Carmel. Other artists associated with the New Deal project visited the area over the years and Colonel Harold Mack, who built the hacienda outside Monterey which later became Santa Catalina School, was a member of the original committee established to oversee the WPA’s Coit Tower plans.

The Coit Tower bond to Carmel will be celebrated in an exhibit of photography, original art and sculpture April 17th through May 22nd in Cherry Gallery, with an opening reception on Friday, April 17th from 5 – 7:00pm. In addition to artwork and sculpture by Ms. Albro and Mr. Hall, the exhibit will include photographs of all 25 original Coit Tower muralists and biographical material curated by Jon Golinger, past president of the association Telegraph Hill Dwellers and the leader of the Protect Coit Tower Restoration effort. Additionally, Mr. Golinger will give a talk and slide show on the project on Saturday, April 18th beginning at 2 p.m. in Cherry Hall.

Last May, a $1.7 million restoration project instilled new life into the tower’s historic fresco murals that depict the city and state during the Great Depression and repaired the roof so it won’t leak onto the works of art.

One of the first projects to be funded by the W.P.A, a number of the artists were influenced by the Mexican muralist, Diego Rivera, including Ms. Albro and Mr. Hall, who visited him in Mexico. Not without its own controversy, some of the muralists were censured for portraying scenes suggesting sympathy toward Marxist ideologies.