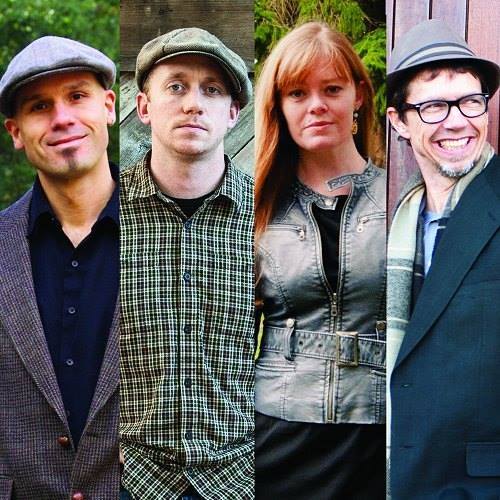 Story Road, a collaboration between four of America’s premier Irish traditional musicians, will perform at the Carl Cherry Center for the Arts on Wednesday, October 4th at 7:30 p.m. Ticket are $20.00, available through brownpapertickets.com or by calling (831) 624-7491.

Each member of the band  – John Weed, Stuart Mason, Colleen Raney and Ryan Davidson – is individually unparalleled, and together blend the best of their talents to create a musical experience rooted in tradition, yet lively, vibrant, and diverse. A Story Road performance is a master class in the story, heart, and music from both sides of the Atlantic. With tour dates throughout California from September 29th through October 8th, audiences from Redding to Los Angeles have the opportunity to see Story Road in concert. You won’t want to miss it!

Colleen Raney has toured extensively both at home and abroad, and has recently been touring as a guest vocalist for the internationally recognized Irish band, Solas. Highlights have included The KVMR Grass Valley Celtic Festival, Winston-Salem Celtic Festival, Juan de Fuca Festival of the Arts, and Seattle’s respected Northwest Folklife Festival, where she was a regular performer from 1980 – 2012. Her music can be heard on radio from Italy, to Ireland, to New York, to Hawaii, to Japan and all parts in between.

John Weed and Stuart Mason are members of Molly’s Revenge, a dynamic, acoustic Celtic band known for its unique and infectious enthusiasm. Molly’s Revenge has performed at many of the top folk festivals and performing arts events in the USA, and prestigious events in Australia, Scotland, and China. They have released 11 albums and appeared on stage with John Doyle, Liz Carroll, Aaron Jones, and other top Celtic artists. “There is an engaging freshness and yet an impressive maturity in their playing,” said National Heritage Award recipient Mick Moloney.

An accomplished fiddler across genres, John Weed has lived in Ireland and immersed himself in the traditional styles of Clare and Donegal. The result is an old-time Irish fiddling style that compliments his forays into bluegrass, swing, and other American music. Stuart Mason has been collecting and performing traditional music for over 30 years. He has appeared on stage from Ireland to China performing Celtic, old time bluegrass, and his original compositions, which have won awards from the West Coast Songwriters Association.

Talented multi-instrumentalist, songwriter, and ethnomusicologist, Ryan Davidson has been performing across genres in the US and Europe for the last 2 decades. After years spent in Ireland; graduating the University of Limerick; studying jazz at the Bob Cole Conservatory, and performing with countless traditional, folk, rock and blues artists, he has developed a dynamic, diverse, and complimentary style that has lent him to collaborate on over 20 albums with prominent performers in a variety of genres.

Complete tour information, including dates and locations can be found at storyroadband.com.