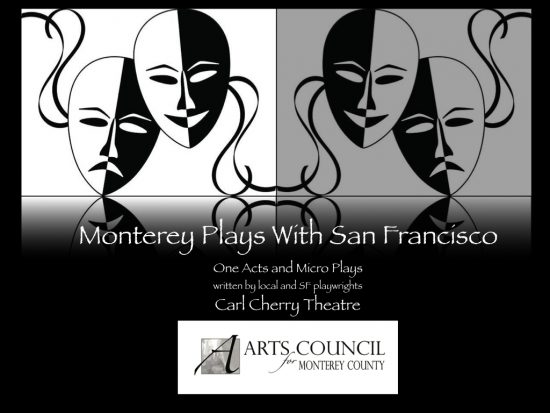 Friday, Nov. 8/Saturday, Nov. 9: He Fell In, But I Did Not, by Nina Solomita; Daylight Savings, by Erik Roycraft; Euterpe, by David Norum; Brick House by Janice Blaze Rocke

Sunday, Nov. 10:  La Petenera and the Flamenco Time Machine by Nicole Henares and Aideed Medina; The Story of No Existo, by Monique Rose; Conversation by Joe Nance; Euterpe, by David Norum; He Fell In, But I Did Not, by Nina Solomita

Friday, Nov 15/Saturday, Nov. 16: He Fell In, But I Did Not, by Nina Solomita; Daylight Savings, by Erik Roycraft; Euterpe, by David Norum; Brick House by Janice Blaze Rocke.

Nina Solomita, MFA, is a playwright, actor, workshop and writing instructor, and professional editor committed to writing roles for women that show them in all their humanity. She was last seen at the Cherry in 2018 as Seal in My Mother’s Keeper by Jane Press.

Erik Roycraft lives in Salinas. As a Monterey County Theatre Alliance board member, he designs the organization’s newsletter. His play “Euphoria” appeared at the Cherry earlier this year, and his literary sci-fi novel “Crooked Corners Elegiac” is on Amazon.

Joe Nance graduated from San Jose State with a degree in English and Radio and Film Arts. He is deeply interested in writing, acting, music, and visual art.

David Norum became a cop after graduating with a music degree.  After retiring from the force, he became a musician, actor, and writer.  He has had two full-length plays “Mozambique” and My Name Is” produced in Monterey and beyond.

Janice Blaze Rocke is the creative director of the local performance arts group, The Eclectic Collective. She has written, performed in, and produced events at Carl Cherry Theatre, Henry Miller Library, The Lab, Dali Expo, Paper Wing Theatre, The Pacific Grove Art Center, and The Lost Church in San Francisco.

Nicole Henares is a poet, writer, performer, and educator who is interested in how Lorca’s duende is a cross cultural spirit.

Aideed Medina is a poet and spoken word artist who creates and performs poetry in English or Spanish as dictated by the inspiration of each individual piece.

Monique Rose is a local musician, painter, actor, and poet. She received her MFA in poetry from Sarah Lawrence College and studies art and dance at MPC. She continuously strives to refine herself, sifting through material of everyday life for possible avenues into the sublime.

Euterpe by David Norum: A short musical cabaret based on an existential concept by Suzy Newman and Kitten Blankenship.

Daylight Savings, by Erik Roycraft: A woman with an alert mind comes to realize she’s unable to communicate with her husband or caretakers.

He Fell In, But I Did Not, by Nina Solomita: Sharon approaches Nadine at a restaurant with in an unconventional remark that could be interpreted as a little crazy. During their unusual interaction, however, common ground is reached.

Bank Street Blues (a monologue) by Nina Solomita: A mentally ill woman speaks to her mother on the phone about wanting to go home for Christmas.

Brick House by Janice Blaze Rocke: A young woman’s subconscious speaks to her in the form of fairy tale characters as she attempts to deflect the “big bad wolf.” A window into the future reveals how she eventually flips the script.

La Petenera and the Flamenco Time Machine by Nicole Henares and Aideed Medina: a dialogue reflective of the connection between Flamenco and historic and present political struggles.

The Cats, by David Norum: a 42 year-old jazz musician calls his mom to give her some good news but she can’t let go of the past.

And Still I Love This City by Nicole Henares: a love letter to a San Francisco seen between the cracks of gentrification.

My Name Is (monologue), by David Norum: an excerpt from a play about a woman who suffered years of abuse from her partner as it was related in court.

Blaze, by Janice Blaze Rocke: a conversation with a demon priest who haunts the main character that ends in triumph.