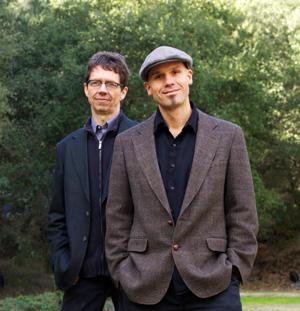 John Weed and Stuart Mason play compelling, exciting music that explores the connections between Ireland and America, both ancient and modern. On fiddle, guitar, mandola, and banjo they bridge the Atlantic to summon a music that resonates with every audience. With the well-known Celtic powerhouse Molly’s Revenge, Stuart Mason and John Weed have appeared on festival stages from Glasgow, Scotland to Shanghai, China. Both are also members of the old-time bluegrass group Little Black Train with mandolin wizard Kenny Blackwell.

An accomplished traditional-style fiddler, John Weed has lived in Ireland and immersed himself in the regional styles of Clare and Donegal. The result is an old-time Irish fiddling style that compliments his forays into bluegrass, Appalachian, swing, and Scandinavian music. A classically trained violinist, John leverages his understanding of the instrument to coax emotion from every tune. He has returned to Ireland many times to hone his skills and collect tunes at their source.

Stuart Mason was born in the hills of West Virginia, grew up in Cincinnati, and has been playing traditional music on stage for over 35 years. He is known for his authentic vocals, driving backing on guitar and mandola in alternate tunings, and inability to hold his whiskey. On banjo he plays in the older clawhammer and two-finger styles. Stuart has won awards for traditional singing (Goleta Old-Time Fiddler’s Convention), mandola (Topanga Banjo and Fiddle Contest), and songwriting (West Coast Songwriter’s Association). Deeply rooted in Americana, Stuart’s original songs are the direct outgrowth of the many years he has performed traditional music.