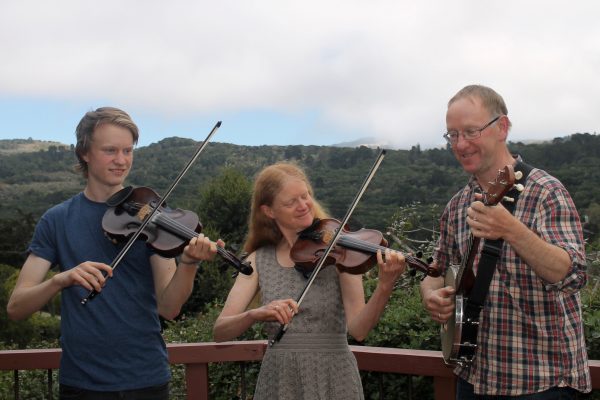 Feleboga will perform a concert of old-time music from the Appalachians on Friday, August 24th, at 7:00 pm at the Carl Cherry Center for the Arts in Carmel. Feleboga (fiddle bows) is a band from Norway, composed of family members Mattias Thedens  (fiddle, banjo, vocals), Elizabeth Gaver (fiddle, vocals), and Hans-Hinrich Thedens (guitar, banjo, vocals). Tickets are $15.00, available through Brown Paper Tickets or by calling (831) 624-7491.

After living in Johnson City for several months in 2004, they have returned to the Appalachian area almost every summer to continue their immersion in the music – fiddle tunes, songs, and ballads. The concert will present two new string band CDs featuring the family. Stories and projected photographs will illustrate their journey with the music.

“The Moose Whisperers” is the self-titled debut CD of the exciting young band with Mattias on fiddle. The Moose Whisperers won the old-time band contest at the prestigious Appalachian String Band Festival (Clifftop) in 2016. After performing at the festival the following year, the band recorded this CD in Washington DC. They toured Norway and Denmark in January 2018 and have been invited to perform and teach at the Gainsborough Festival in February 2019.