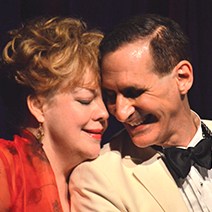 KT Sullivan and Mark Nadler reunite to celebrate the Alan Jay Lerner centenary with their new show, Almost Like Being In Love, on Friday, November 16th and Saturday, November 17th, at 7:00PM. The talented duo, described by Stephen Holden of the New York Times as,”ferociously entertaining,” will include songs like “If Ever I Would Leave You,” “Gigi,” “I’ve Grown Accustomed to Her Face” and other Lerner masterpieces. When the show was performed in England, it received 5 out of 5 stars by The London Times.

KT Sullivan was named artistic director of The Mabel Mercer Foundation in 2012. She starred in the Broadway revival of Gentlemen Prefer Blondes, and headlined for almost two decades in The Oak Room of The Algonquin Hotel. . She guest starred on Garrison Keillor’s “A Prairie Home Companion,” recorded six albums on the DRG Label, was the star vocalist on two tours of China with The Manhattan Symphonie, and was twice named one of “The Top 100 Irish Americans” by Irish America Magazine.

Mark Nadler is an internationally acclaimed singer, pianist, tap-dancer and comedian. He is the recipient of the 2015 Broadway World Editor’s Choice Award for Entertainer of the Year. His off-Broadway hit, I’m a Stranger Here Myself, has been honored with the 2013 Nightlife Award and was nominated for a Drama Desk Award and two Broadway World Awards. Mr. Nadler has performed at Carnegie Hall with the New York Pops Orchestra and has been a soloist with the Baltimore Symphony, Indianapolis Symphony, Oregon Symphony, National Arts Centre Symphony in Ottawa and others.  Mark is the recipient eight awards from the Manhattan Association of Cabarets, three Backstage Bistro Awards, two New York Nightlife Awards and two Bay Area Outer Critics’ Circle Awards. Broadway credits include Dame Edna: The Royal Tour and The Sheik Of Avenue ‘B’. At Lincoln Center, Mark cowrote, directed and starred in Schnozzola, a tribute to Jimmy Durante for the “Reel to Real” series.