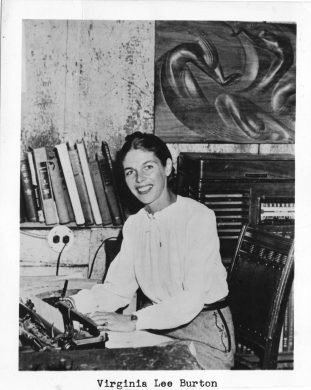 Virginia Lee Burton created the wonderful machinery heroines (Yes, they were girls!) like Mary Anne, the obsolete steam shovel who finds a new line of work in Mike Mulligan and His Steam Shovel, and Katy the determined little tractor in Katy and the Big Snow. Virginia Lee Burton, the name used for all her children’s books, was her maiden name. More officially, and in her other works, she was Virginia Lee Demetrios, wife of George Demetrios, and mother of the two little boys for whom she was creating books.

Virginia Lee Burton hoped to be a dancer, and had just signed a contract to be in her sister’s dance troupe when her father broke his leg. She chose to stay home to look after him instead of travelling as a dancer. That, she said, “was the beginning and end of my dancing career, which was just as well, because I wasn’t very good anyway.”

While at home in Boston, Virginia Lee took a job as a “sketcher” for the Boston Transcript, making sketches of dancers and actors to accompany articles written by the drama and music critic. It was in Boston that she enrolled in a drawing class taught by George Demetrios, an art teacher who had come highly recommended to her, and whom, after only a few months, she married.

Once she had her two sons, Virginia Lee became interested in producing books for children. She tested both the stories and the drawings on her own children, adjusting things (or not) depending on their reactions. “Children,” she said, “are very frank critics.” And excellent ones, too, judging by the quality of the finished work her collaboration with her sons produced.

When her sons grew out of the picture book stage, Virginia Lee moved on to another project—teaching design to people in Folly Cove (an area of Gloucester, Massachusetts) where her home was. Her design class evolved into a cooperative group of designers whose works consisted of linoleum block prints stamped onto fabric used to make clothing and items for the home. Products from the Folly Cove Designers, headed by Virginia Lee Demetrios, were sold throughout the United States in the 1950s. Virginia Lee Demetrios died of lung cancer when she was in her fifties. That was the end of Folly Cove Designers, although various museums still feature works from the design cooperative.

If you have young children, I hope you are reading them some of Virginia Lee Burton’s picture books, along with other classic picture books, like those of Wanda Gag. They’re not as flashy as some of the more recently produced children’s books, but they’ve proven themselves popular through a few generations of children, and are a piece of our collective children’s literature heritage. Besides, they’ll like them. I promise.

Reprinted with permission from Rebecca Stark of rebecca-writes.com