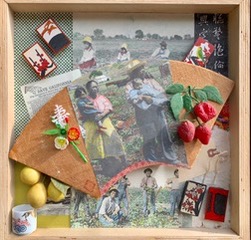 I am a Sansei, a third generation Japanese American. I think of my art as philosophical, historical and personal narratives. I am sorting out how I feel about humanity and the chaotic world around me. An important part of my life experience comes from my Japanese American heritage.  I have created art relating to the Japanese Diaspora to this country, the WWII forced removal to concentration camps, culture and identity.

My art gives voice and vision to the experiences of the Asian American communities. Being a Japanese American artist, I feel a responsibility to tell these unique stories.  I look back into history in order to understand what happened to my parents and my grandparents who first came to California. I wanted to see what my family’s lives were like in this new land.  I saw how my family’s experience of being farmworkers in the Sacramento Delta, or in the dry cleaning business in San Francisco was very similar to other Asian communities. Talking to my parents about their experiences in the Topaz Concentration Camp during WWII, I could sense the hatred that caused the burning down of Chinatowns up and down the coast, or the 1920 Watsonville riot, where gangs would beat up Filipino workers. In the Chinese and Filipino immigrants experiences I saw in essence how we are all related. This was a history of racism, discrimination and scapegoating against these new immigrants, whether from low wages, anti-alien land laws, the burning down of many Chinese communities, exclusion acts against immigration and the concentration camps in WWII.

Fast forward to the 21st century. Trump’s MAGA’s attacks on people of color, soon extended to the Asian communities. When the Covid virus pandemic began, our communities cringed with his repeated use of “Chinese Virus”, the “Wuhan Virus.” We knew this would fan the flames of racism against all Asians, and knew it was only a matter of time that once again we would become the target of hate, racial scapegoating and discrimination.

As an artist it became even more important that I created art about our history as immigrants, farmworkers, railroad workers, fishermen as well as speak of the contributions that our ancestors made in building America.  It also connects us with the experiences of the Indigenous people, African Americans, Latinx, and all people seeking freedom and the American dream.

The Asian American experience has been one of struggle, resilience and in essence a story of the human condition.