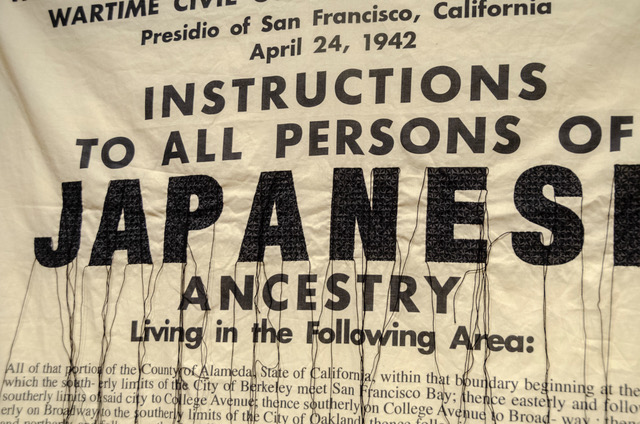 “Instructions to All Persons of Japanese Ancestry”

I didn’t learn anything about the Japanese Internment Camps growing up – not in school, not from anyone. Only as an adult in college did I begin to learn about this tragic and embarrassing part of our history. My mother immigrated to Japan with my father [they met in Japan], in 1971 a mere 4 years after the Loving decision that allowed mixed races marriages.

When I was a child, I think my mom, while moving through her own assimilation, wanted me to feel as “American” and comfortable as possible. She did speak Japanese to me, and for sure there were cultural points and customs that were engrained into me. But I didn’t have to go to Japanese Language School, and even though it sometimes went against her better judgment she let me do many typical “American” things.

When Trump was elected, like many, I believed our nation is once again confronting, resisting and reasserting white racist and colonial ideals. With the “Muslim Ban” and families being separated and kids being put in cages, it’s not hard for the mind to begin to re-visit Internment camps and the Holocaust [also part of my heritage as my father is Jewish. His relatives fled Eastern Europe long before WWII, but were certainly aware of persecution and prejudice].

My father in law also happened to be stationed at a camp – I believe in Arizona – when he was a younger man. Sadly he passed away before I got to ask him any real questions, but I remember him talking about the innovation of the internees and how he kept in touch with many of them. Apparently he was one of the only staff/white men invited to some of the camp reunions/get-togethers.

I decided to really start to research Internment – just looking at Executive Order 9066 and all the Civilian Orders that followed gave me chills. I also soon discovered that there were relocation collection points near my house.  That I knew these places and could superimpose in my mind the lines of people waiting to be “evacuated” at these locales. Also for a minute let’s consider that word choice. It feels like a literal whitewash of events. The Japanese were not being saved from a disaster, nor willingly leaving to escape eminent danger… but if you are fighting a war against a country for putting certain people in camps, you can’t outwardly admit you are doing the same thing on your soil, right?

From Wikipedia:
Japanese Americans were incarcerated based on local population concentrations and regional politics. More than 110,000 Japanese Americans in the mainland U.S. who mostly lived on the West Coast, were forced into interior camps. However,  in Hawaii, where 150,000-plus Japanese Americans composed over one-third of the population, only 1,200 to 1,800 were also interned. The internment is considered to have resulted more from racism than from any security risk posed by Japanese Americans. Those who were as little as 1/16 Japanese, and orphaned infants with “one drop of Japanese blood” were placed in internment camps.

The idea that someone who was 1/16 Japanese could and would be interned, hit home. If 9066 were executed today, my mother [who is a naturalized citizen], myself, my daughter – we would all have to go into a camp. Also the continued usage of “one drop” rules in this country seems appalling, but amazingly not at all far-fetched. Even now. With the “Muslim Ban”, and the current atrocities occurring at the border it saddens me that we are ignoring our past and that we are simply repeating it.

The work I’m making revolves around actual documentation from the camps as well as documentation of racist reactions and signage from businesses that had to close for “evacuation” and the signs and maps posted and use to collect residents. In my hope of trying to highlight and process the events, I’ve been struck by how camp residents kept up a sense of normalcy, celebrating harvest festivals, Obon Odori, boy scout parades and the like. I see these acts as resistance and resilience. The ability to attempt to honor traditions and keep life in the camps mirroring what life would have been like out of the camps fills me both with heartache and incredible respect.