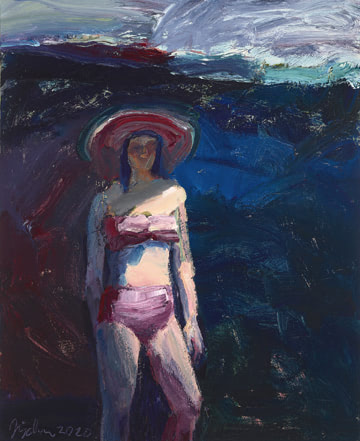 I have been a figurative painter my whole life. At the beginning of 2020 I had a real desire to paint a single figure against a dark background. It started off in March with the painting of Francoise Gilot, done from a photo of her and Picasso at the beach. My interest was in showing a figure who could be seen as under threat (hence the darkness surrounding them) and still surviving. This gave me an inner satisfaction. It helped me get through an unbelievable time of aloneness that I think everyone was experiencing.
Later, I lampooned the situation with paintings such as Lost at Sea, in which a “cool” man, unbeknownst to himself, has become unmoored and is floating far from shore. The latest piece, Bob and the Cherub Painting, shows the hope and renewal I feel is coming.

Lin Fischer was born in Healdsburg, CA and grew up in Sacramento. She was fortunate to get the BFA degree at UC Davis in the early 1960s, when the now-heralded art faculty was just beginning to gain recognition. Her major was painting and subject matter was the figure. Teaching faculty members Ralph Johnson, Wayne Thiebaud, Roland Petersen, and Robert Arneson influenced her work at the time. There was a feeling of freedom and “do your own thing” in the art department, which was very inclusive. Later on, the work of David Park, Richard Diebenkorn, and Joan Brown became important inspirations for Lin’s work. The MFA degree came in 1993 from the Academy of Art University in San Francisco, at which Lin taught masters candidates painting after graduation. She also taught in other bay area venues and in her studio until 2006. Now Lin works and lives in Oakland, CA. Her paintings have been shown across the US and are included in many museum and private collections.