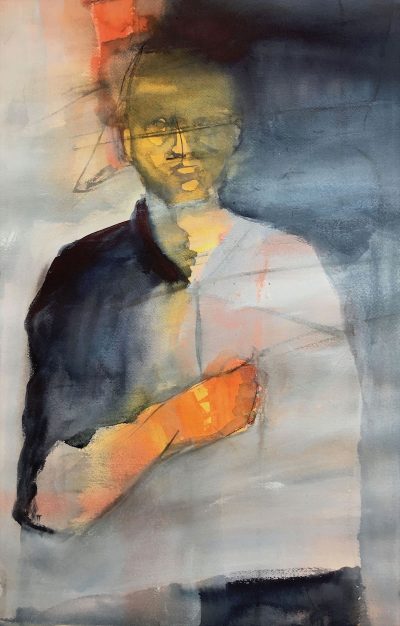 “Invisible Me”
A self portrait.  I often have felt invisible in America.  But I am worthy of being visible.

After a career as an architecture and planning consultant, I started painting full time in 2012. I painted landscapes and cityscapes for a few years, until 2015 when I began shifting to mostly figurative work, as a way of conveying more directly themes that are meaningful to me, including racial discrimination and social justice.

My inspiration is my own personal and family history. My recent paintings focus on the Asian-American experience, something I call “(In)Visible.” My initial motivation was simple: I wanted to show Asian faces in paintings. Inspired by contemporary painters and especially African-American painters who depict every day people as proud and dignified, I want to tell the story of Asian-Americans who experienced profound discrimination, worked hard in tough occupations, and suffered numerous indignities for the sake of their children.

This is a story of Asians in America and Asian men in particular. Asians are sometimes called “the model minority.” Asian men historically have not been viewed as leaders, or as thinking, feeling, or sexual beings. In popular culture, Asians were the Kung-Fu masters, the enemy soldier, the chef. Never the hero or the one people could relate to emotionally.  tt’s the story of Asians in America from the time they first stepped on our shores. In 1880’s: the Chinese Exclusion Act. In the 1920’s: immigration quotas aimed largely at Asians. In 1942: 120,000 Japanese Americans  forced to move to “internment camps” in remote, desolate areas—made “invisible” by their complete removal from the West Coast.The invisibility of Asians is a story that needs to be seen and heard, by my children, my generation, and the American public. In this series, I depict Asian Americans posing for family portraits, working, walking, going about their daily lives. The figures are not fully there, mostly washed away.  But the faces are clearer and say: “Look at me. I am an Asian American. I exist. I am human.  I am not invisible.”