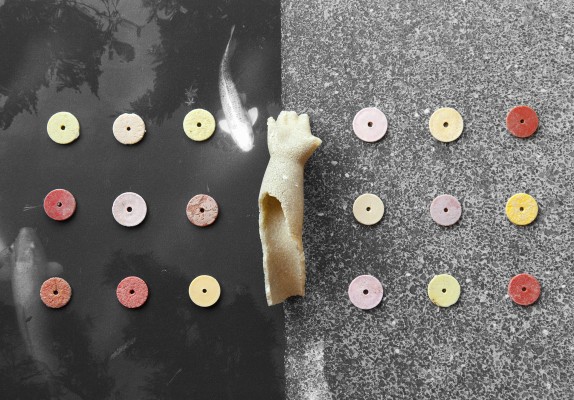 The Carl Cherry Center was founded by Jeanne D’Orge, neé Lena Yates, a published poet and playwright, who emigrated to the United States from England in 1906.

D’Orge and her first husband, Alfred Burton, a Dean at Massachusetts Institute of Technology, had left the East coast for Carmel at the urging of the artist Marsden Hartley. After living in Carmel for a number of years, D’Orge moved to the Augusta Robertson cottage, now the home of the Carl Cherry Center for the Arts, with her second husband, the inventor Carl Cherry.

In the early years of D’Orge and Cherry’s marriage, the couple sustained themselves on work, canned tuna, and coffee. D’Orge, at the suggestion of her husband, began to paint while Cherry preoccupied himself with his inventions, one of which was the Cherry Blind Rivet. Cherry’s invention revolutionized the aircraft and shipbuilding industries, and was in great demand during World War II. While income from the Cherry Blind Rivet provided the couple with enough money to live lavishly, it changed their lifestyle little. They bought more books and more records, and began to think of establishing a foundation to support experimental arts and sciences.

After moving to New York in 1906, D’Orge became associated with “The Others,” a group of iconoclastic poets that included Marianne Moore, William Carlos Williams, and Wallace Stevens. Her poetry, some of which was published before she was 20, was included in the anthology The Others and The Poetry Journal. In 1923 Scribner’s Magazine published her award-winning “Lobos” poems.

D’Orge died on May 1,1964, at the age of 87. Although her painting was recognized in her lifetime for its forcefulness and spirit with exhibits at the Santa Barbara Museum of Art, the Park Avenue Galley in New York City, and the De Young Museum in San Francisco, D’Orge insisted that her paintings never be sold, saying only, “I’m just a paintbrush for God.”

JOSEPH CAMPBELL: THE ARTIST’S WAY
Month-long exhibit and programs exploring and celebrating the mythologist, Joseph Campbell, who once lived and worked on the Monterey Peninsula and lectured at the Cherry Center. JOSEPH CAMPBELL: THE ARTIST’S WAY events and art focused on the examination of the powerful influence Campbell continues to have on contemporary art as well as the importance of artists as society’s myth makers.

BECOMING VISIBLE
The Face of Homeless Women in Monterey County is a multi-part traveling exhibit exploring the lives of Monterey County’s homeless women. The exhibit, which was first displayed at the Cherry Center in November 2012, employs still photography, video and narrative text and takes a multi-layered look at the issues confronting homeless women throughout Monterey County.

“The goal of this project is to give homeless women a chance to be heard in our community. We do not expect to solve the issue of lack of services for these women but hope to raise public awareness and encourage the efforts of homeless providers in Monterey County,” says Rev. Michael Reid of St. Mary’ Episcopal Church in Pacific Grove, who established the project along with Rev. Kathy Whilden and the Carl Cherry Center for the Arts.

Each year, the Carl Cherry Center for the Arts recognizes the talents of local high-school art students by dedicating an entire exhibit to their work. Thinking Out Loud is a display of works by Monterey County High School artists, featuring a wide range of media — including painting, drawing, ink-relief, sculpture and collage.

The Monterey County High School Poetry Awards were established in 1996, as a collateral program to Thinking Out Loud, to recognize and promote excellence in high school poetry writing. The concept for the poetry program grew out of an awareness that poetry by young people is vital and open-eyed yet largely unrecognized.

The awards program, presented annually in collaboration with the Monterey Public Library, helps promote literacy in both English and Spanish, provides a forum for creative expression, serves as a way to help students develop a sense of belonging to their community, and facilitates interdisciplinary teaching methods.

Hundreds of Monterey County students participate in the poetry program each year. Poems from all participating high schools are selected to be included in the awards and are judged on their merit. Certificates, cash awards, and poetry anthologies honoring the student poets are presented at an annual ceremony.